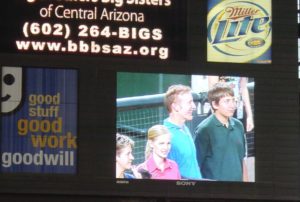 Personally, life and love have always felt like obligations. Becoming Big Brother was simply my choice. Abandoned by his father and described as a sensitive child who cried a lot and had few friends, Daniel was instantly recognized as my Little Brother. I was matched with Daniel shortly after his eighth birthday in September of 1998 through the Big Brother Big Sister school program. We met weekly, balancing time spent on homework with various weekend activities. We grew closer through hiking, biking, rollerblading, snowboarding, and watching movies. Shortly after meeting, Daniel poignantly expressed, “Since I met you I no longer cry at night.”

My transformation as a Big Brother occurred during an anguishing moment for Daniel. He was obliged to wear a seemingly uncool derby while horseback riding and looked positively adorable. I realized that most of my own childhood perceptions of being goofy were actually of my choosing. I may have easily been seen as adorable despite having red hair, freckles and buck teeth. Daniel made me really look good when he won the essay contest titled Why My Big is Best, distinguishing me as a finalist for Big Brother of the Year. Our match culminated in my speaking on Daniel’s behalf at his Eagle Scout Court of Honor and having received a pin stating Eagle Scout Dad!

With the willingness to serve and die for his country in the U.S. Navy and his eagerness to become a young father, Daniel’s life did not turn out as I had hoped,  but rather as I had advised, “Listen to the little voice inside.” My growth as a Big Brother was enormous through both soothing the tears of my own inner wounded child and choosing to support Daniel becoming Dan without any attachment to him becoming “Super Mario Brother.” The enlightenment born from this match of service with compassion provided inspiration for my writing WISHES TO DIE FOR, a heart-centered guide for those who feel forsaken as they approach the end of life.