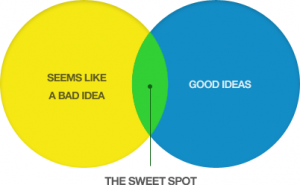 Paul was only 53-years-old when he collapsed at home. Barely responsive, paramedics rushed Paul to the ER and life support commenced. After Paul was stabilized, he was taken to the x-ray department for a stat brain CT. The physician made it clear to Lisa that her husband’s condition was critical and she began preparing for the worst while staying strong for her 10 year-old son.

The brain CT scan showed a major bleed that had most likely occurred from a tumor. The neurosurgeon reviewed the scan online and expressed concern that Paul would not survive this cataclysmic event. The emergency physician then questioned the neurosurgeon, “How certain are you?” The answer would determine what hope the physician would give Paul’s family and how long Paul needed to be on life support.

The neurosurgeon conceded that Paul’s brain hemorrhage had damaged his brain beyond repair and that his medical prognosis was futile. The sweet spot of certainty makes end-of-life decisions easier to make, but how easy would it be for Lisa to accept this prognosis? The emergency physician spoke to Lisa and the family about Paul’s condition as a matter of fact without giving false hope. During this conversation, Lisa immediately awakened to the need for her husband to die with dignity.

As caregiver, the sweet spot of certainty allows you to make life-and-death decisions through a five-step thought process:

There is no middle ground to certainty. You either have it or you don’t. The same goes for providing dignity for your patient. You will either support your patient’s dignity through reaching certainty or deny it through wishful thinking.

Most physicians are reluctant to provide certainty due to the fear of being wrong. This may result in you and your patient remaining in limbo. Fear only contributes to your being more afraid of making wrong decisions and not feeling in control of the situation.

Having attempted to push the neurosurgeon for an all-or-nothing plan of action, the emergency physician set an example that caregivers might follow. You need the expert to give you his or her best opinion that aids your ability to make difficult medical decisions.

Does certainty require that you be 100% right or might 80% provide enough certainty? In matters of life and death, most caregivers prefer to be exactly right. This creates undue stress on your patient through having to do everything possible before he or she may die. This leaves little room for negotiation or the discontinuation of medical intervention.

Paul could have transferred to the neurosurgical center with a valiant attempt made to save his life. Surgery would neither provide a cure for the underlying issue of his brain tumor nor restore brain damage. When four out of five doctors recommend a specific treatment, will you agree?

80% percent of your maximum heart rate achieves the best results as you exercise.  Applying this principle to matters of certainty reinforces the message that expecting 100% of yourself or your patient becomes self-defeating. If 80% is a good enough percentage for your heart, then its inherent wisdom might help your decision-making ability.

Emotions flare during emergency situations. If you intend to seize the moment, you must be able to make quick decisions. Life-and-death choices rarely become easier over time. Delaying the decision to end life prolongs grief, putting you at risk for broken-heart syndrome.

Paul’s family needed to make the best of a bad situation – to strike while the iron is hot. Holding a patient captive on life support becomes a form of torture. There must be a purpose for life support based upon the prospect of recovery. After the neurosurgeon rendered his verdict, Lisa needed to either accept his opinion or voice opposition.

While Lisa wanted to be strong for Paul, she needed to sacrifice her personal needs to his wishes. Certainty rested upon being selfless, putting Paul first and herself second. In a striking turnabout, her passion shifted from saving his life to supporting his dignity.

The more certain you are, the more reasonable you become. Reasonable people make better decisions. Certainty also alleviates anxiety. It allows you to breathe easier so you can listen more carefully.

The sweet spot of certainty mixes the good with the bad to achieve harmony. Striking a balance between expressing your fear and listening to your heart is the art of being reasonable while letting good conscience to be your guide.

With a little prompting, the emergency physician was able to redirect Lisa’s emotional state to a reasonable state. She wanted to be there for Paul, but she had to calm herself to comfort him. Lisa began to dig deep to find her own source of refuge and strength.

Certainty allows you to seek resolution. Even when something bad happens, certainty combined with optimism allow for something good to arise. Paul’s family went through their own emotional breakdown which lead to a breakthrough. They were eager to return to Paul’s side and support his passing without upsetting him.

Courageously, Lisa felt compelled to lie with her husband one last time. As she rocked Paul gently, her actions spoke louder than words. A priest happened to be passing through the emergency room and Paul’s family was receptive to receiving spiritual support and providing Paul last rites.

After the blessing, it seemed appropriate to turn Paul’s life support off. His 10-year-old son found his own voice of certainty and requested ten more minutes. The family agreed. When the ventilator was discontinued, Paul slipped away with the certainty of his family’s blessing.

Awakening the sweet spot of certainty is like flipping on a light switch. The end-of-life conversation immediately changes from quality of life to quality of death. The luxury of needing only 80% certainty allows the remaining 20% to create an opening for compassion. Providing patients a break from prolonged medical intervention allows them to feel at ease while minimizing your own grief.