Barbara Bush: The “Enforcer” of Dying with Dignity

Last week Americans celebrated the life and death of former first lady, Barbara Bush. As the matriarch of the Bush family dynasty, she was fondly referred to as the “enforcer.” This term of endearment gained her respect and served others in knowing what she demanded. “What Barbara says, goes” is the lesson we can all take to our graves. With bright gray hair and keen whit, Barbara Bush symbolized a woman who aged with grace and died with dignity. 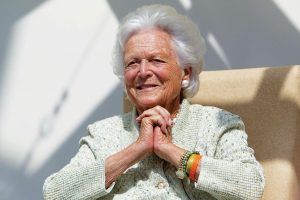 Dignity can seem a vague term that’s better appreciated by the heart than explained by the mind. This “certainty of being right” is more intuitive than standardized. Dignity comes in all shapes and sizes, yet the key to Mrs. Bush’s dying with dignity was her final decision to not return to the hospital. With much discussion last week about advance care planning and the need for advance directives prompted by National Healthcare Decisions Day, Mrs. Bush’s example provided a summary for “the rules” of dying with dignity:

Most children relate to mothers keeping them on the straight and narrow.  Mom might say that any task you undertake is as hard as you make it. Barbara Bush, “the enforcer,” made dying with dignity as simple as 1-2-3 through being willing, able and ready to die.

While self-determination helps people enlist both war and peace, most prefer to end life peacefully. The necessary steps to make peace occur in five sequential conversations:

Being ready to not have others call 911 and refusing hospitalization requires preparation. A mother (patient) needs to have all her ducks in a row along with home support services that include a nurse, acting as the guardian angel. Mrs. Bush’s dying with dignity did not occur suddenly or by accident, yet she had a rapid response team available in her hour of need. The Bush family was ready to provide comfort rather than perform CPR or transport their mom to the hospital.

Whether you’re age 92 with congestive heart failure – age 82 with sepsis – age 72 with dementia – age 62 with a stroke – age 52 with metastatic cancer – age 42 with quadriplegia – or age 32 with muscular dystrophy, every single person has the right (Patient Self-Determination Act) to refuse hospitalization. Yet many of these patients are not given the free choice to refuse treatment and permit death without feeling ASHAMED of giving up.

Barbara Bush is no longer with us to enforce and prove how self-determination leads to appropriate behavior and care for herself. Clearly, she was not afraid to die or ashamed about what others thought.  Her legacy and example serve as a reminder that we all need to be our own enforcer of dying fearlessly and on our own terms. For many of us, that requires having the wherewithal and means to refuse hospitalization and remain at home.

While being kind to one another and called to comfort the dying, I’m reminded of my own enforcer (Mom) reciting the phrase, “Charity begins at home.” Also, “Where charity and love prevail, there God is ever found” gives awareness to the true meaning of “comfort care.”

Boundless blessings are given to those who transcend from life to death – from dignity to sanctity. Barbara Bush was laid to rest with the knowledge that she truly lived as a First Lady and died with dignity.