Ruth, age 67, had been bedridden due to multiple sclerosis and colon cancer for two years. Complicating matters, she was prone to urinary infections and sepsis. Her body was ravaged by IV lines, breathing and feeding tubes, colostomy and a bladder catheter. While Ruth appeared to be an ICU patient, she was not. Her husband, Bill, cared for Ruth in their home. She had never been denied medical treatment.

Bill called 911 when Ruth had become feverish and less responsive. In the emergency department, the physician clarified Ruth’s “care status” – similar to determining a patient’s code status. Was Ruth to be resuscitated and treated aggressively? Or made comfortable?? Bill had never considered this question and choice. He only wanted his wife to get better. After two years of Ruth being on a respirator, Bill’s goal was to have her breathe on her own.

Ruth appeared to be aware of her surroundings, but was despondent. She was either afraid to speak or had given up on having her say. Her eyes seemed to be telling the physician to let her rest in peace. The physician was surprised to learn that Ruth had been receiving palliative care. Bill scoffed, saying this service was all talk and no action. His idea of a team approach meant round-the-clock care for his wife.

Bill shut the conversation down with the poignant question, “Are you suggesting that I shouldn’t have called the ambulance?” The physician felt as powerless as Ruth, realizing that speaking the truth might be malpractice.

An eerie feeling came over the physician. Bill’s lovely bride had become a corpse bride. At one point, Bill had gladly accepted her as a gift from God and carried her over the threshold of matrimony. Perhaps it was time for Bill to lift Ruth through another threshold and given back to God. What would her Creator think of Ruth’s treatment on earth? Hadn’t Bill made a vow to love, honor and cherish? Would Bill have anyone to blame but himself for her suffering at the end of life?

Loved ones are even more precious near the end of life and family caregivers need to think twice before calling 911. Keep these considerations in mind as you shoulder the burden of helping a loved one transition from life to death:

The collapse of a loved one is reminiscent of the phrase, “I’ve fallen, and I can’t get up.” In this story’s context, it’s about having an incurable illness with no hope of recovery – falling on hard times. Family caregivers and healthcare providers naturally want to help, but how do you respect your fallen comrade? Do you give them attention by listening more or doing more?

Nothing in Ruth’s actions implied that she wanted more medical intervention. Perhaps she had given Bill prior instructions about how to care for her in this moment. Had Ruth, in her wildest imagination, ever perceive being kept alive at any cost? The physician was listening to his inner voice of empathy that would allow Ruth to rest in peace without having to rise to the challenge once again. However, the decision was up to Bill.

When patients fall on hard times, caregivers might choose to pick up their loved ones and remove them from the battlefield. When these patients can’t get better, are you willing to treat them like they’re precious cargo?

Family caregivers and healthcare providers treat chronically-ill patients like there is something wrong with them. This is harmful and often hurts their patient’s feelings. Prideful patients insist nothing is wrong and wonder what all the fuss is about. If looks could kill, their eyes might be saying, “Why can’t you people mind your own business?”

Ruth was Bill’s responsibility, but was he treating her like she was precious or a patient? Did he care for her humanity? Or did he contribute to her morbidity/suffering? Was he adding insult to the injury caused by her illness?

No one can betray – or comfort – a loved one more than a family caregiver. The business of caregiving is almost like Mission Impossible – charged with making sure your loved one arrives safely to his or her final destination. Better to replace insults with praise and to treat injury with compassion.

Caregivers live in jeopardy due to the danger of loss, the idea of doing no harm and fear of failure. If you’re in a quandary, you’re at the mercy of other rescuers. The end of life is a perilous situation when holding out hope for recovery. Death feels like personal failure when taking responsibility for both the loss of life and doing harm to your loved one.

Bill was less concerned about harming Ruth and more convinced that he needed to save her life. While never intending to fail Ruth, he had not considered the jeopardy she was being subjected to. Bill placed faith in the healthcare system. The same system that had put Ruth’s life in jeopardy.

Patients are often prevented from dying with dignity because of double jeopardy: healthcare providers bent on saving lives and family members insisting on calling for help. You won’t change the system, but you can stop calling 911. Losing hope allows you and your patient to move beyond jeopardy into everlasting peace.

Create Your Own Footprints in the Sand 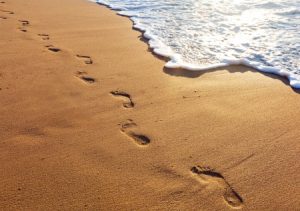 Imagine leaving an indelible mark on your loved one’s passing through remembering the poem “Footprints in the Sand.” Although it’s implied that God carried the downtrodden during his or her time of need, you might consider the same spiritual calling to comfort the dying. You walk beside them during life, but carry them near the end of life. Only one set of footprints exists in the sand during these later times. Family caregivers cannot take this responsibility lightly, despite the torment of having to lay someone down to rest.

Ruth might very well look back on her life and wonder why there were so many footprints on the beach when she died. It might appear like she was trampled! Wasn’t it Bill’s responsibility to protect her from this onslaught?

Family caregiver often feel isolated and called to achieve the impossible, “making it all better.” The end game is returning your precious cargo to God safely and unharmed. As you consider carrying loved ones through the headwinds of winter, why not ensure their comfort and safety by keeping them warm at home?