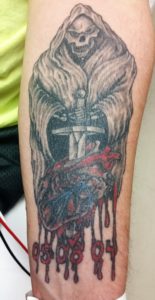 Self-expression is rarely easy for patients because words often cannot articulate how patients feel inside.  Children are often asked to draw pictures in order for psychologists to gain insight into perceptions surrounding particular life experiences. Paul, a 57-year-old patient with a provocative and morbid sense of humor, stunned the ER staff with a tattoo on his left forearm depicting how he felt on the day he had a heart attack (05/08/2004). This was a day marked in infamy and a declarative moment of Paul’s legacy: My heart’s been stabbed, but my spirit remains defiant.

While laughing in the face of danger and standing before the grim reaper, Paul’s mockery of death was lighthearted and balanced. His ability to wrap his head around having a heart attack with a twisted sense of humor was actually an effective coping mechanism that offered an inspiring message. Others can easily identify and become uplifted by Paul’s apparent vulnerability and survivability. While possibly taunting the grim reaper, Paul clearly allowed this satanic force to get under his skin and permeate his being.

Male ego prompts the slogan, Never let them see you sweat. Each of us is threatened by our own mortality and a predictable sense of betrayal by our bodies. Naturally, one of the major organs is destined to fail and ultimately be the cause of our own death. As unsettling as this may seem, we still have the ability to maintain composure. We can make the best of a bad situation while not allowing devastation to get the better of us. The real crime of passion, stirred by betrayal, is allowing anger to become passive aggressive and self-sabotaging.

While dissecting and digesting this tattoo, Paul mentioned that his cardiologist was particularly drawn to the gross anatomy and attention to detail that the artist gave to the image of the heart. A heart attack can be both a real life situation and a spiritual awakening. In Anatomy of the Spirit: The Seven Stages of Power and Healing, Caroline Myss, Ph.D. brilliantly describes how the seven sacred chakras are integral to understanding the mind-body relationship. The more mindful and in tune we are with our bodies, the more we hear our hearts speak. This “intuition” releases the tension inherent to living and unleashes the power to heal.

Tattoos might be seen as a form of self-mutilation – self-mutilation understood as an intentional release of psychological stress. While some people often feel that self-mutilation represents a danger to self, others find mortification of the flesh sanctifying. Through wearing his wounded heart on his sleeve, similar to the stigmata, Paul proclaimed himself to be the sacrificial lamb representing all who are at the mercy of the grim reaper. Once the grim reaper ultimately removes the stake from Paul’s heart, his life will end.  In the meantime, he has continued to live his life fully through the gift of self-expression and by leaving a lasting impression on others through his spiritual revelation.