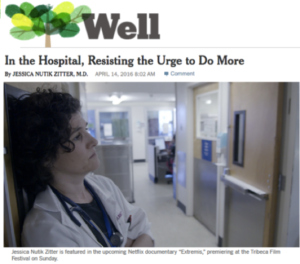 Few patients anticipate the need for critical care. Some people call 911 too late. Such was the case for Selena in the Netflix documentary “Extremis.” She was having chest pain and struggling to breathe, but she told her daughter not to call EMS.  Selena stopped breathing on the way to the hospital. EMS responded and began CPR. A breathing tube was inserted. Selena suffered brain damage and was admitted to the ICU at Highland Hospital in Oakland, California.

Selena was in a vegetative state, lying in a bed and hooked up to machines. Her daughter and brothers were at her bedside – hoping and praying for her recovery. Dr. Zitter was the ICU physician in charge of her care. Selena did not have an advance directive. It was now up to the family members to decide Selena’s fate. An advance directive could have been Selena’s “get out of jail free” card.

3 Practical Considerations for advance directives include:

A wish implies a desired outcome. A plan of action exists within a timeframe. The average patient spends three days in the ICU. Seriously-ill patients generally stay longer with worse outcomes. If you wish for a good death, you have to consider dying sooner than later. Will you complete your advance directive in a timely manner? Would your advance directive state how long a breathing tube stays in?

Hope implies an expectation of improvement. False hope is misleading and leaves people in the dark and wondering. Dr. Zitter opened up the discussion of what was best for Selena with the family. What feelings and hope did her daughter and brother have? Dr Zitter listened intently while being careful not to express her opinion. The Hippocratic Oath states, “above all, I must not play at God” – pretend to be all knowing.

Dr. Zitter may not be all knowing, but was she holding out hope for the family? She had left the situation open-ended while Selena was in extremis. The brothers were leaving Selena’s fate up to God. If Dr. Zitter were being objective, she would not give the family any hope.  “Hope springs extremis.” Your advance directive has to trump your family’s belief that hope springs eternal.

Physicians lose credibility when they rely on family members to tell them what to do. If the physician does not know how to manage extremis, will the medical power of attorney know better?  Physicians have to remain grounded in evidence-based medicine. This is the medical condition, and this is the prognosis. A physician’s internal advance directive has to lead end-of-life conversations.

Most physicians tend to be wishy-washy about the certainty of death in any given patient.  It was evident that Selena was going to die, yet it took six months for her to die.  By collapsing her head in her hands, Dr. Zitter displayed torment. It’s troubling when healthcare providers fail to heal patients. And doubly embarrassing when patients receive indignation. All physicians need a practical plan for allowing patients to die with dignity.

Patients also need to be practical. They need to plan for extremis by completing an advance directive sooner than later.

Subscribe to Dr. H’s Clipboard –
Caregivers often suffer in silence while looking after loved ones and grieve in the aftermath of their death.

These twice a month email tips help caregivers understand that pain and suffering are inevitable – grieving is optional through better advance care planning.