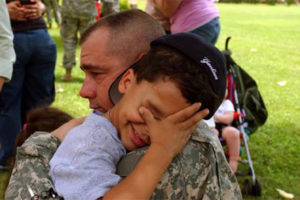 Brad was different after he returned from the warzone, having completed the second deployment of a stem cell transplant to combat multiple myeloma. He looked good despite his generalized battle fatigue, carrying both the scars of a dialysis fistula on his left arm and a chemotherapy port under his chest wall. Brad had received support from his family during this time and a great hurrah from coworkers upon his triumphant return to the office. Nevertheless, he had become marginalized through feelings of no longer fitting into mainstream society. He had been through a disease process that few experience and many shun.

People are often called upon to serve their country or serve their God, but there is always a price to pay in being “out there.” During this process one can become separated from the herd. While Brad loves time spent with his family, he particularly loves spending time with others with whom he can truly relate. Prior to his multiple myeloma diagnosis, Brad attended spin classes three times a week. Now he faithfully uses this same time assisting in church functions that aid the poor and visits others who also sit in the same dialysis chair he used to occupy. Brad is living proof that anything is possible through faith.

Similar to Middle East deployment, treating multiple myeloma takes a leap of faith. Naturally, the uncertainty of what lies beyond the horizon and the possibility of not returning home is very frightening. Brad did not know much about his enemy [multiple myeloma] and quickly realized that the fight is rarely with one enemy at a time – multiple medical diagnoses typically gang up on patients. Brad had to contend with a heart blockage during his first deployment and a blood clot in his leg following the second. Nevertheless, Brad’s leap of faith became an opportunity to deepen his faith while exploring his spirit connection to others.

Through faith, we are called upon to love our enemy (disease). Brad took this to heart by reaching out to others engaged in a similar fight with cancer. He believes this to be the path to glorify God and express gratitude. Brad never imagined God having abused him through striking him with multiple myeloma. God was truly using him. Following this battle, Brad continues to walk in the light of having formed a partnership with multiple myeloma based upon mutual respect – respecting his enemy as his greatest ally in personal fulfillment. Through confronting his mortality, Brad has become an enlisted foot soldier in the spiritual conquest of making a difference in other’s lives.

Second deployments give soldiers the opportunity to brag and state, “Been there, done that.” Having raised two successful children, Brad can also proudly claim victory as a parent. Although he looks forward to becoming a grandfather someday, he is simply grateful for each and every day.  He thrives in being a grandperson who has been blessed by God and called to help heal the sick on an extremely personal and profound level – similar to that of raising children. Brad’s bout with multiple myeloma has seemingly increased his strength as a great father and shining example of Our Father, Who art in heaven.

In many respects, Brad represents the many fathers who are marginalized and perceived as being the lesser of two parents through spending more time deployed than at home. There exists a childish misunderstanding that Dads are less concerned about the well-being and value of those dear to them. Sadly, respect is mostly paid to fathers in retrospect – similar to how homage is often paid to our troops. We may poignantly look for ways to make amends to our fathers through supporting our troops, while hailing the visionary crusade, #DadsLivesMatter. The Wounded Warrior Project provides one opportunity to celebrate dads and the more personal is Team Brad. Truthfully, #KidsLivesMatter to the extent that they honor their fathers’ deployment and service.