Sam’s memory was fading at 82, but he was well-aware of having chest pain. After having undergone a second cardiac bypass surgery ten years ago, his wife Lucy knew to call 911.  The paramedics gave Sam nitroglycerin which promptly dropped his blood pressure and slowed his pulse rate. Sam received IV fluids and arrived safely at the ER with his pain improving.

A recent PET scan revealed diminished blood flow to one part of Sam’s heart. His cardiologist was considering the option of performing another angiogram and placing another stent in the blocked artery. Sam’s cardiac enzymes were elevated in the ER, indicative of more damage to the heart. His pulse was 40 which meant Sam might need a pacemaker.

Sam was anxious upon arrival at the ER, but he now appeared calm with arms folded behind his head. He was eager to go home. His two children had now arrived and it was the ideal time for the ER physician to discuss the pros and cons of further medical intervention. While Sam was bored during the homestretch of his life’s journey, his family members were sitting on the edge of their seats.

These three tips will help you lighten-up during your patient’s homestretch to the finish line:

As memory fades, your patient’s interest in living wanes. The concept of survival implies the person is “in it to win it” and at least remains competitive while in the rat race.  It’s unlikely your patient will desire another go-around if he or she does not remember running through the last course of treatment.

Sam was obviously content to sit along the sidelines and not continue ‘racing’. His heart rate demonstrated this. The family maintained a blank stare as the emergency physician explained the test results and his concerns about Sam’s underlying heart condition worsening. The physician went on to express that more of the same damage to Sam’s heart was expected.

Did Sam’s family wish to face the inevitability of him dying with heart disease or continue medical intervention? Was there any way of easing their concerns while not prolonging Sam’s life? Yes, but this would require a palliative approach.  By facing the fact that Sam’s heart was becoming weaker, his family could either see this a window of opportunity or the worst thing that could happen

Look at the person

Physicians learn to care for patients, while caregivers need to treat these patients as family members. As patients experience the natural progression of disease with age, they’re often overwhelmed with many diagnoses, interventions and medications deemed important. Who decides what’s important or what’s not?

Oddly, Sam’s family did not appreciate his easygoing nature. They were more concerned about what the cardiologist thought was best for Sam rather than looking at their father and husband. To the casual observer, Sam looked well for his age and perfectly content. His family seemed to view him as diseased.

The emphasis needed during the homestretch is treating the person and not the disease. By looking at the person rather than ordering more tests, you communicate “Nothing’s wrong.” There is no need to fix what does not appear broken.

During the homestretch, it’s easy to see which runners are ahead and which are behind. Pointing out the obvious when patients are near the end of life is contentious and creates unnecessary stress. Most people take pride in doing the best they can. Telling patients that they’re dying is inconsiderate. Those who prefer to know will ask.

Sam’s son stated the obvious when he questioned, “What happens if dad’s heart continues to slow down or stop?” Naturally, Sam would cross the finish line and experience cardiac arrest. Does this have to be explained or is it simply understood?  More importantly, did the son know if Sam had a signed DNR (do not resuscitate) order? 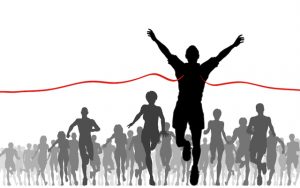 Sam’s dying was of concern to his family, but not for Sam. While he was in the homestretch, but his family was not willing to accept it. The homestretch is a big deal and the importance of acknowledging it cannot be overstated. Sam’s illness would be best managed by getting him to the finish line safely while treating him with dignity.
“GET OUT OF ER” Free Card

Most people wish for the magic card that can trump any no-win situation. In real life, this card would have the name of a palliative nurse. The caregiver can notify the palliative care nurse who might “bail the patient out of the ER” and return him or her home without further obligation or medical intervention.

The medical slang term GOMER is an acronym for “Get Out of My Emergency Room” (quote from Samuel Shem’s “The House of God”). It’s used in reference to a demented diseased patient. Many of these patients would gladly choose to get out of the ER and physicians would be happy to oblige. However, caregivers often stand in the way of allowing their patients to be free and return them home.

Sam and the ER physician were eager to have a palliative nurse intervene and allow for his discharge home.  The family preferred his cardiologist make the decision and stood with his recommendation to proceed with the angiogram and stent placement. With two against four, the odds were not in Sam’s favor. Unfortunately, he had no GET OUT OF ER FREE card provided by a palliative care agency.

It’s easy to view the finish line from the homestretch. It’s not always easy to see the homestretch from an ER gurney. As your patient deals with a chronic medical condition, each ER visit presents a crossroad.  To move forward often requires hospital admission. To return home or to a skilled-nursing facility enacts the homestretch – palliative resources. The “homestretch” is the crux of advance care planning.