You are here: Home / Family / TO BE OR NOT TO BE RIGHTEOUS 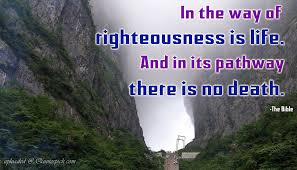 With considerable angst, I cared for an elderly gentleman who had Multiple Myeloma, recurrent pneumonia and was not responding to treatment. He was also receiving dialysis and experiencing insufferable bone pain. He arrived by EMS gasping for breath and his blood pressure was low. It was clear he was not long for this world. In fact, he repeatedly stated, “I’m done.” Luckily, his adoring wife entered the room within minutes of his arrival for us to weigh medical intervention for or against his wishes.  She was gorgeous and clearly in command of both her appearance and the situation, but hot her husband’s feelings. She was adamant that any decisions regarding his care would be based on obtaining all standard laboratory and x-ray findings, not his wishes. She was not done yet.

This man was dying and deserved to rest in peace. The wife insisted he was delirious while at the same time she professed her belief in miracles.  As a doctor, I am trained to look at the person first before relying on numbers. With her image resembling that of a sexy puritan. I was lured into believing that she might agree to have me initiate a hospice consult if the numbers were dismal. In retrospect, this man never had a prayer for hospice care given her cause of righteousness. The test results only prompted her appeal to pursue further intervention. Oddly, I found myself looking away as I spoke to this woman with a great smile and seething affect who stood in opposition to her husband’s pleas for dispensation and mercy.

God help the righteous; blessed are the merciful.  The righteous become trapped in belief systems that seemingly pay mind to loving in a proper way (by the numbers). Notwithstanding, mercy is loving from the heart. To be righteous is a conservative principle, while being merciful is a liberal principle. This distinction is how the opposing factions seemingly line up on either side of the pro-life movement. I used to feel there were merits to both sides of this argument. However, I cannot imagine there being any merit to not treating people kindly, humanely and with mercy. In general, being righteous does not serve humanity. In this story, having a righteous wife defied reason, empathy and this man’s dignity.

We might agree to disagree, but not simply in the cause of righteousness. Ideally, we might agree to work towards affinity with one another.  I realize that this woman was daring me to suggest withholding or withdrawing care from her husband. She was handing me a shovel and if I were to dig, she was going to dig her heels in deeper in a cause to save her husband’s life.  For my patient’s sake, I simply treated him in my own conservative way and by the numbers. He was ultimately transferred to the ICU for further intervention while I washed my hand of her self-righteousness. In the meantime, I considered my own righteousness in the conundrum of providing mercy and dignity to those dying.