Sean, a robust 29-year-old, came to the ER, experiencing constant chest pain and shortness of breath. This was not related to exertion or eating, nor was there evidence of infection or diminished breath sounds. Dr. H wondered if Sean might be experiencing a deeper kind of pain and asked, “Are you feeling stressed?” Sean broke down saying, “My father died last Christmas and I’m dreading the holidays.”

Dr. H suggested that the magic of this season can be transformative – in particular, how we evolve in our thinking about Santa Claus and how it’s better to give than receive. As we grow up, we need less from Santa Claus, while learning to be more like him. Sean was mourning the loss of his father like when children learns that Santa Claus isn’t a real person. Sean could either acknowledge his father doesn’t exist or make believe he lives in the North Pole. Out of site never means out of mind. Santa’s legacy of oversight, gift-giving, and unconditional love never dies.

There was great solace for Sean in thinking about how life proceeds from admiring both father and Santa, while becoming more like them. He was able to develop a new outlook for the Yuletide, along with having the spirit to carry on the example set by his father. Through honoring his father’s memory over mourning his loss, Sean was taking the first steps to becoming a true survivor. 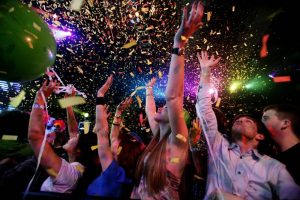 These tips, from the Four Seasons to Caregiving, offer a practical survival guide:

The New Year comes with the promise of replacing the old calendar with a new one and starting over with a clean slate.  With the loss of a loved one, your interest in living may sometimes wane. What are you going to do now with this new life?

Your schedule becomes . . . your schedule. The days are yours to do with as you wish.

For Sean and most caregivers, “Doing as you wish” means enjoying a Merry Christmas and a Happy New Year, spreading good cheer during the holiday season. Following the death of a loved one, there is no time like the present to reengage your heart. Feeling sorry for yourself is self-defeating and often discouraged by devote parents.

Many people resort to burying their heads under the covers after the loss of a loved one. The best way to make a clean break might be to plan a getaway. After the expected loss of your loved one, consider planning a trip that you may have been putting off. Perhaps the trip of a lifetime with the prospect of getting back to nature, while restoring your sense of well-being. Becoming receptive to feeling blessed is how you begin to survive and feel alive again.

Awaken to the New Year

Sunrise each morning reminds caregivers that a new day is here. How will you face it after your family member has passed? With feelings of devastation or duty?

Being awakened from a dead sleep can be reminiscent of a bugle playing “Revelry.”  You’ve become enlisted in “Survivor Bootcamp.” The grieving period requires discipline to go through the actions of getting out of bed, eating, showering and listening to commands. The gradual return to normal is how you’ll make it through these initial weeks.

Sean may have to fake it until he makes Christmas feel normal again. Sean’s becoming despondent and isolated would set the stage for him to routinely feel miserable during the iconic – “most wonderful time of year.”

After the dark of winter, Sean might expect the sun to begin shining brightly again as he begins to realize that every ending holds the promise of a new beginning. Survivors gain resilience as they become receptive to what life has to offer with each new season.

Acknowledge the deceased as one of the loves of your life

It’s hard to imagine that your world only revolves around one person, yet a family caregiver is prone to only have eyes for one love. Relationships transition from past, present and future to enjoying the significance of other people from one season to the next. These individuals can teach you about loving another as yourself, providing you the ability to show more patience and compassion.

Sean may take solace in knowing who his father truly was. What type of example did he set? What memories did he leave? If Sean sat the head of a banquet table of people from his past, present and future, his elders would have the seat of honor next to him. Similarly, the dearly departed always maintain a special place in the family caregiver’s heart.

You’ll most likely never know the depth of your love until you’ve lost a family member. We often acknowledge the deceased as guardian angels watching over us.  The angel “gets his wings” when the bells ring-in the New Year. Also, the caregiver who comforts the dying earns the badges of Courage and Honor.

Triumph comes through stating, “I survived my call to duty.” In many respects, becoming a caregiver is a call to service with the willingness to sacrifice your life for another. Truly, there is no greater love. The simultaneous goals of treating an illness and loving someone to death often conflict. Caregivers must resolve and affirm their actions in each of these opposing duties.

Grief often collapses upon unresolved issues. Sean felt guilty. Could he have done more for his father? Been a better son? Reflecting more on Sean’s grief, Dr. H wondered if this young man had the opportunity to say “goodbye?” Was he at a loss for words during the final moments? Was Sean’s resolution one of believing, “Something’s wrong with me” or “I’m being punished” in the wake of my father’s death?

Caregivers who intend to survive the aftermath of a loved one’s death need to make their “New Year’s resolutions” ahead of time. The theme often becomes out with the old you and in with the new. This better version of you arises from being a caregiver and inspiring others with your unselfish devotion. As the New Year begins, honor the contribution you’ve made to society and bask in the strength of your gift-giving.

Using these tips to anticipate, awaken, acknowledge and affirm, Sean developed the presence of mind to make the holidays bright for his own children. He was given a new lease on life, intending to honor his dad’s memory by lifting others’ spirits. As the heartache lifted from his chest, his breathing became easier and his face beamed. Being a true survivor, he gained the ability to transform his loss into a newfound purpose: being the father his dad would want him to be.