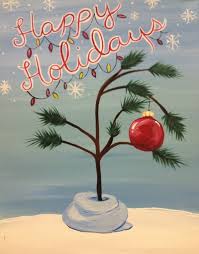 T’is the season to reflect on vitality, seemingly igniting the skies during these darkest days that commence a new era.  Vitality equals dignity and is relative to the notion that we matter even when we do not measure up.  The most captivating illustration of this is the Charlie Brown Christmas tree. We stand in awe of annual Christmas trees at Rock Center or the Washington Mall, but remember the Charlie Brown Christmas tree as the most loveable, primarily due to it being indifferent to its surroundings.  It did not try to be something it was not and was not looking for a Christmas ornament. Its vitality or get–up and go did not necessarily get-up and went, it stayed put and continued to be counted in an unassuming manner.

The liveliness of the Charlie Brown Christmas tree did not arise from pretentiousness, but through a heart-centered indifference rooted in its core. Homage is given to the biblical passage of the meek will inherit the earth, but preference is given to being noticed upon entering a room.  A newborn never seeks to be noticed or loved, yet melts the heart of everyone in the room.  The infant is instinctively lovable through his or her indifference. Oddly, we need this infant to love us more than the infant needs our love. Truly, the meek inherit from the earth an organic indifference, fortifying their vitality and lovability.

Organizations like Compassion & Choices and the Conversation Project are less about life and death and more about the vitality of individuals being appreciated in an indifferent, transcendent light of lovability. Vitality is not necessarily a mindset or found in gift sets, but is a manifestation of the heart. There is tendency to adorn people with countless ornaments and interventions at the end of life similar to the over-exuberance of decorating a Christmas tree with an abundance of gifts underneath. Most people would prefer less tinsel that shines from life-support machines and more splendor that arises from simplicity. Simplicity is inspirational, fortified, dignified, indifferent and peaceful. Pomp and circumstance becomes tacky and dismal when overdone. Similarly, a neighbor’s Christmas extravaganza displays more of a need to win praise than desire for peace on earth.

Vitality through indifference wants for nothing. People are generally encouraged to want things, both at Christmas and the end of life. Wishes push for us to anticipate having a holly, jolly Merry Christmas and to not pout or be like Scrooge. Christmases past, present and future are potentially rebirthing processes of indifference that reconnect us to the beginner’s mind of an infant. The mirror of our own personal nativity is the Christmas miracle that bears witness and adoration to the mutual meekness and indifference radiating from the Christ child. The nativity rekindles awareness of our core divinity swaddled in humanity, devoid of accessories and gadgets that keep us wanting more to life.

Choruses that raise their voices and lift hearts sing hallelujah to the inherent value of our own inner child that no longer needs to prove self-worth in order to be lovable. The offspring of our lives and ultimate gift to others is not showmanship, but rather vitality. This neon light of flashing energy is reminiscent of the inherent dignity we all possess. Dignity becomes realized as the value of our existence and vitality in every fleeting moment of life. The image of the Charlie Brown tree captures the steadiness, stillness and center of indifference which supports peace on earth and goodwill towards all.