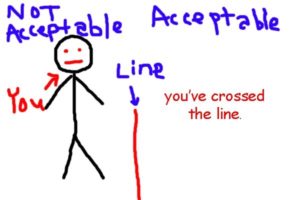 Self-determination often escapes patients while not feeling well and being hoisted onto a stretcher:

Ms. Lacy was 86-years-old and barely weighed 80 pounds. She had an anxious look in her eyes while having difficulty breathing. Her lung cancer was resistant to chemotherapy and had gradually destroyed her sense of well-being for 2 years. Her oncologist had recommended three more treatments before stopping. Ms. Lacy seemed agreeable to this plan of action and ongoing misery.

While fate had determined her lot in life, had she considered drawing a red line to receiving unnecessary medical intervention? Was this red line preset, left to her doctor’s discretion or arbitrarily established in the ER? Patients dealing with life-threatening conditions are often angry or anxious, triggering a chaotic response. They rarely maintain control of these situations.

Three simple guidelines can help patients draw a red upon admission to the ER:

Ms. Lacy’s medical condition had progressed beyond any hope of survival, making further medical intervention futile.  She knew the end was near, but seemed to be distracted by the promise of more treatment. In the meantime, she was experiencing a nervous breakdown. She was used to playing by the rules and having her doctors determine her plan of action. Ms. Lacy had never considered the prospect of a carefree existence. Breaking the rules was difficult for her to imagine.

Ms. Lacy’s arrival in the ER was a commencement exercise. A clear demarcation between the past and the future. It was time for her to take an inventory of her life and reset her priorities. Instead of minding follow-up appointments with her oncologist, she could tend to some personal files that she had been neglecting to organize. She was encouraged to create another type of nesting phase in anticipation of much-needed relaxation and enjoyment during her final days.

Did Ms. Lacy prefer the doctor listen to her medical history or focus more results from lab studies and x-rays? Self-determination requires forethought, while being exploited appears to be an afterthought. The tourniquet had been placed on Ms. Lacy’s arm to draw blood as per protocol, yet the need to pursue abnormal lab findings at the end of life rarely makes sense.

After being given the option to defer another needle stick, Ms. Lacy was beginning to appreciate the benefits of drawing her red line. The concern about mission creep at the end of life –whereby patients receive unintended care/consequences – might be traced back to the very moment that the invasive needle slithers under the skin. This procedure crosses the red line between using common sense and relying on evidence-based medicine.

There is always room for improvement, but not perfection. Ms. Lacy was lead to believe that if her lung cancer did not improve, she was a failure or a goner. Life happens and cancer occurs as a natural part of living. No one is perfect, yet Ms. Lacy was led to believe that she would be good if her cancer was cured. However, there was nothing truly wrong with her. She was actually being given the opportunity to feel fulfilled in life.  She also deserved to be given reassurance, like receiving a badge of honor.

With drawing a red line to further treatment, the mission was directed toward calming her anxiety and alleviating suffering. She was offered medication to help her relax, which she accepted. Almost immediately, life no longer seemed miserable. With her husband and daughter at bedside, Ms. Lacy expressed overall gratitude for her good fortune. She was able to regain control of the situation by taking a different perspective of thanksgiving. By not crossing the red line in the ER, Ms. Lacy was able to retreat and say to herself, “Mission Accomplished!”

Keep in touch with me through signing up for Dr. H’s Clipboard: