Wayne, aged 67, didn’t have a choice when his wife decided to not prolong her life after breast cancer was diagnosed 10 years ago. Wayne was now faced with a similar choice for himself. His cardiologist instructed him to go the emergency department to have fluid drained from his lung cavity that resulted from recent pneumonia that led to sepsis. The cardiologist wanted Wayne in tip-top shape before implanting a pacemaker into his heart.

Wayne’s daughter Jodi asked, “Will the pacemaker prolong his life?” “Of course,” said the ED doctor. To which she replied, “Hmm. The cardiologist said it wouldn’t.” Wayne and Jodi seemed confused. Which doctor should they believe? Wayne seemed focused on the past and his wife’s courageous choice to not prolong her life.

While lying on the ED gurney, experiencing the tension of a life-and-death conversation, Wayne could freely choose to take or leave having a pacemaker. Jodi and the ED doctor had no intention of outwardly debating the pros and cons, potentially biasing Wayne’s decision. The decision to prolong life or die naturally was going to be up to Wayne. 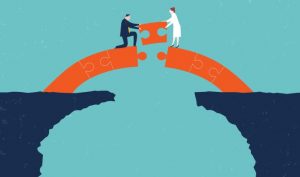 At present, was Wayne truly willing, able and ready to die?

Being willing, able and ready to overcome any type of hurdle requires strength, courage and resolve respectively. Like most, Wayne valued life, but he did not fear death. With strength in numbers, Wayne could easily find support from those preferring to prolong life. But did he have the courage and resolve to allow nature to take its course? Courage is necessary when going solo, as the end-of-life journey is a go-it-alone destination.

The following are three ways for Wayne to foster courage:

The ability to think for yourself without someone else telling you what to think takes courage. It’s likely that dying is considered going against the collective mindset, making it seem wrong. When content in life, there’s no sense of shame present or the need to do more.  Contentment aligns with the Serenity Prayer, reminding patients to accept the things they cannot change and to have the courage to change the things they can.

Wayne understood he was older, that his heart was failing and had the knowledge that he couldn’t change his cardiologist, daughter or ED doctor’s opinions. He began to weigh the difference between preserving his life and dying naturally. Letting nature take its course meant letting go of everything that mattered to him. What was Wayne holding onto and what was he willing to let go of? Wayne needed several minutes to sort through this thought process. Courage rarely happens without forethought.

Certainty is at the heart of every life-and-death decision and having courage will allow a person to speak up. The decision to refuse medical intervention is often met with opposition. Patients who don’t follow standard medical practice are often perceived as fearful, foolish and negligent. They are discouraged from speaking their minds and asserting courageous action. While trying to convince others of your intention, consistency demonstrates commitment. Also, the chance of achieving personal goals improves through clearly telling others your objectives. Namely, family members and physicians.

Wayne was a man of few words, yet he had strong convictions. He knew what he wanted and needed help in putting his feelings into words. The physician convinced Wayne that there was no wrong choice between receiving and refusing a pacemaker. The only wrong choice was the one he would regret. Wayne was not only given permission to live or die freely, but he also had a real opportunity to die with dignity

The joy of setting and achieving a goal can feel like reaching Nirvana. There are many milestones that present as hurdles to jump over throughout life. Yet, the primary two are the transition from childhood to adulthood and that from adulthood to “sainthood” (your spiritual purpose in life). Resolve exists when clearing the hurdle. This will spur you on to greater glory and fulfillment. Timing is everything in clearing the hurdle and courage provides momentum and the readiness to jump at the optimal time.

Like most, Wayne’s purpose in life was to gain inspiration from those who came before him, providing an example to those who followed him. Wayne’s life-and-death decision was influenced by his wife, yet his emerging courage came in teaching Joni a profound lesson in how to stand up for yourself. The purpose of Wayne’s life was not to oblige others, but to show both appreciation for others and kindness to himself. Through compassion, Wayne would have the courage to act purposely and have life end peacefully.

After some time speaking with Joni, Wayne made the decision to forego the pacemaker and return home. A referral was made for palliative care which would offer ongoing home support services. In a man-to-man exchange of unspoken trust, Wayne extended his hand to the ED physician with eye contact as a heartfelt sign of gratitude. Expressing gratitude is the surest way to think separately, speak convincingly and act purposefully.