Josh was carrying his 78-year-old mother, Amelia, from her wheelchair to a stretcher when the emergency physician walked in.  Seven years ago, Amelia had a stroke that paralyzed her right side. Her husband had been her primary caregiver until he died of a heart attack four days ago. Amelia was trying to do for herself despite Josh’s best intention to keep her from falling.

Amelia’s primary physician referred her to the emergency department after learning that she hit her head that morning while taking blood thinners. While showing little interest in being there, Amelia responded to the emergency physician’s questions and participated in her examination. A CT scan of her head was ordered along with X-rays of her right hip and lower back. These tests did not reveal significant abnormalities. What if they had? Would Amelia be reunited with her husband or held against her will?

Arrangements were currently underway for Amelia to live in a skilled-nursing facility. Josh could not manage her care at home; he had no other choice. It seemed that if Amelia had her druthers, she’d prefer to be with her husband. Her actions spoke louder than her words, “Let me go.” She was neither complaining nor demanding. She was a humble woman who had both her pride and the will to die.

The emergency physician insisted that Josh and his wife consider enrolling Amelia in home-based palliative care. There was no guarantee that Amelia would not fall again, but it was almost certain that more emergency department visits were in her future. Josh was torn between following her doctor’s orders and honoring his mother’s wishes to avoid physicians, hospitals and institutions. There was no mystery as to where Amelia’s heart was at that moment. 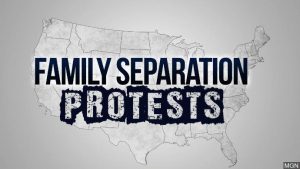 “Victims of the circumstances are not criminals”

It’s easy to label those in society who slip through the cracks as being wrong and subject to imprisonment. Patients know this feeling and like most, Amelia feared this loss of freedom. Society demands that “illegals” or those who might do harm to self or others need detention. Invalids might feel like illegals while receiving the same treatment. Caregivers might think of themselves as border patrol agents, often guarding the golden door to freedom and a “better place.”

Relabeling both patients and illegals as victims of circumstances instead of criminals provides for leniency. The only purpose in sending Amelia to the emergency department was to determine which internment camp was appropriate for her. Even if she had a head bleed, Amelia would rightfully appeal for house arrest over an ICU admission.

“Possession is nine-tenths of the law”

Assuming custody of another person’s life, otherwise known as guardianship, charges the caregiver to act consciously and responsibly. The law is considered a moral code and legal directive. Caregivers are often afraid of violating the law by not following doctor’s orders. Josh oversaw Amelia’s best interests and was aware of her self-determination. Josh understood that Amelia did not like hospitals, yet she was there against her will.

The emergency physician explained that giving Josh a home-based palliative referral was like giving Amelia a waiver from unnecessary emergency room visits and medical intervention. Possession of this referral and enlisting the services of a palliative care nurse would allow Amelia to have representation and a “proper hearing” of her circumstances and wishes. Josh’s guardianship would become better supported under this unwritten “law.”

“All for one and one for all”

Zero tolerance means that there’s no exception or excuse for doing harm to another. Family separation can be mean spirited and evil. It’s beneath the dignity of proper society and violates the sanctity of family by pulling members apart. As a society, we stand by the Declaration of Independence that states, “We hold these truths to be self-evident.” All men are created equal and endowed by their Creator with certain unalienable rights, among these. . . Inherent Dignity!

When agreeing that family means everything to a person and personal dignity is absolute, there can be no dignity given to victims of circumstance separated from their families. Even If further evidence showed Amelia incurred brain damage, there was zero question in the emergency physician’s mind about releasing Amelia from the hospital.

Never underestimate the power of family caregiver advocacy. Caregivers may be downright bossy and purposeful in getting what they want from both patients and their physicians.  Priorities are most often geared toward keeping families together along with providing respect for each person’s opinion.

Josh was both willing to keep his mother alive and having her be reunited with his father. But this is the problem, not a plan of action. The best way to move forward would be for Josh to first become certain of his mother’s wishes and then act accordingly. His desire to care for his mother similarly to his father was clouding his certainty. There was no way he could become like his father unless he chose to sacrifice everything to care for his mother.

“What God has joined together, let no man separate”

The divine magnetism of love that brings two people together is a matter of the heart. Those who take it upon themselves to separate family members for no good reason appear heartless and godless. It’s easy to point out the injustice of others; it’s more difficult to act to keep couples together. Yet through “one nation under God,” all things are possible – even zero tolerance for separating family members.

Amelia and her husband deserve everlasting peace and no primary physician, emergency physician or son should be prevent nature from taking its course. Amelia should be free to live the rest of her days unharmed by the authorities who might imprison her in a healthcare system that often violates the sanctity of life through prolonging the inevitable. People wish to be free to live and die – to be with the ones they love – to abide by God’s plan.

If all politics are local, political policies often become personal. Because of this, true caregivers must remember to prioritize the person over the policy.

Building bridges between people and life-and-death issues in a different context allows me to shine a brighter light on a subject that’s near and dear to my heart. Family separation is an act of violence. Placing family members and invalids in internment camps instead of under house arrest seems to go against the right to life, liberty and the pursuit of happiness.

Immigration laws need to reflect the values of a country. Most Americans stand by the Statue of liberty that represents this open-invitation:

Give me your tired, your poor, Your huddled masses yearning to breathe free, The wretched refuse of your teeming shore. Send these, the homeless, tempest-tossed to me, I lift my lamp beside the golden door!

As with patients near the end of life, all immigrants need documents. These documents need to make sense. No person can be deemed “illegal” in America without receiving due process under the law.

Learning to stand on this principle rather than an inane policy is an exercise of civil disobedience. As a caregiver, only you can decide if you’re part of the problem or part of the solution to zero tolerance for family separation.